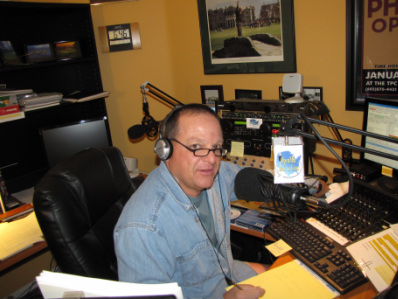 Chuck is the guy who came up with this crazy idea.

What makes this stuff work?

We have put together a variety of applications to make this LPAM and internet radio thing work. Here is a partial list of our setup.

We have a multi computer setup in the studio. Our "broadcast" computer runs our broadcasting software and our encoder software, BUTT.

The broadcast computer is fed by an audio mixer. We have several sources that feed into the audio mixer.

A second computer, running ZaraRadio studio automation software, feeds the audio mixer. The ZaraRadio program allows us to program which files and programs to play at specific times. With the ZaraRadio software, we can automate the inclusion of various internet feeds for news and other program content. We can also program ZaraRadio to play our music archive at specific times when we don't have live or recorded shows.

We have a third computer that can feed into the mixer, if need be, for audio files from the internet and from LiveStream. On this computer, we also run the Skype software that allows us to do remote talk with some of our contributors as well as allowing our listeners to "call in" to our various programs.

We also have a couple of stream players that can be found on the home page.

The first player is a 96 Kbps stream provided by MyRadioStream.

The second player is a 128 Kbps stream provided by Caster.FM,

Here is a list of some of our equipment:

We also have a selection of sound effects and short music clips programed into our automation software. Those sounds and clips are provided by PartnersInRhyme.

TalkRadio 1620 KTFL is not affiliated with nor endorsed by the Robson company.

Our broadcast area is limited to the Robson Ranch area of Eloy, Arizona.